Part of a series of posts on finance.

Towards the end of January the stock price of GameStop (GME), a brick-and-mortar video game retailer, went completely crazy. This has been chronicled in a lot of details in the press, but I feel like shedding light on a few points.

First of all, the year-to-date chart of the GME stock price (click the picture for a bigger version): 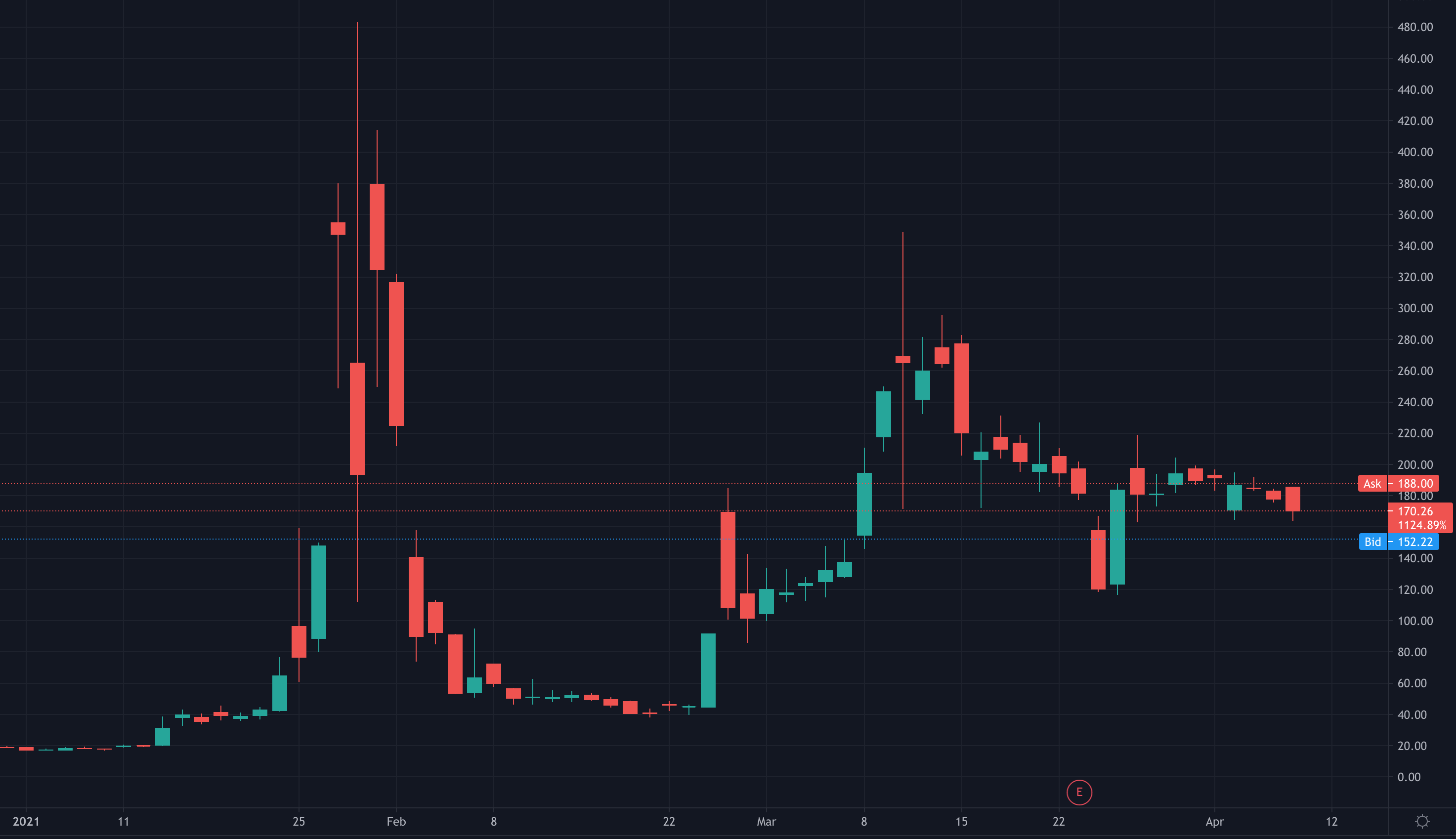 I'm not going to write a summary of the events, you can find that online, on wikipedia or here (warning for that second link: lots of unreasonable speculation). If you're not familiar with the matter, I highly recommend you give those a read, otherwise the rest of this article won't make much sense. You can also try to google around for other takes, to see what the media coverage was like.

here is a short summary of the key points.

GME's incredibly run is often attributed to a "short squeeze". But what is that even?

Short-sellers believe a stock's price will go down. They act on this believe by borrowing the stock, selling it, and planning to repurchase it later, at a lower price.

A short squeeze occurs when the price of a stock rises sharply, forcing short-sellers to purchase back the stock.

If they believe the stock is worthless and will eventually crash back down, do they have to cover? Long story short: yes, because of margin requirements.

See, unlike purchasing stock, short-selling exposes you to potentially unlimited losses: there is no limit to how high a stock can go, but it can't go lower than 0. As the share price increase, you become insolvent on paper.

Brokerage firms do not like their clients to be insolvent, even if "it's only temporary". So they impose margin requirements, which dictate how much collateral you must own to offset the losses incurred by increase in the price of a stock you sold short.

Brokerage can also require that short sellers return the loaned share "with minimal notice". It is my understanding that they do not tend to do this excepted in extraordinary situations, because they profit from lending the shares, and doing this abusively would lead to short-sellers to take their business elsewhere. The GME short-squeeze certainly qualifies as an extraordinary situation, but I haven't heard any report that brokers recalled loaned shares. In general, the margin requirements will fulfill the same purpose in a more transparent manner.

If short-selling mechanisms are unclear for you, I recommend reading the Mechanism section of the wikipedia page on shorting

Something that's very unusual and salient in the GameStop story is that GameStop had a short interest greater than 100%. Said otherwise, there were more shares being sold short than actually existing shares.

How is this possible? It's quite simple. When you sell a share short, you borrow it from person A, promising to return it, and sell it to person B. Person B does not know you're a short-seller and perceives this as a completely normal transaction. Person B is entirely free to borrow his share to another short-seller, who will in turn sell it to person C. This process can theoretically continue forever. Now, persons A, B and C all own the same share. Note however that persons A and B, having loaned their shares, do not have the associated voting rights.

The WallStreetBets crowd — and many other people too, including some that should have known better, sadly — were quick to formulate all kind of spurious narratives regarding the event.

This is not a new idea. Would it surprise you that people blamed short-sellers for the 1929 stock market crash? Politicians passed restrictions on short selling at various time that systematically failed to have any impact.

A little bit of common sense should be sufficient to understand this. If short-sellers drive the price down, they are offering a bargain to those who believed the prevous price to be fair. The stock is now under-valued and there is a profit to be made.

Short-sellers also cannot literally destroy a business. What they can do is severely impede the company's ability to finance itself by emitting new shares (since the value of those is much lower). However, a stock offering is not the only means to finance a company, and you get the idea that if the company can't even secure a loan, the short-seller might have a point.

In fact, short-sellers fulfill a useful function in the market — they help make price more accurate. (This is not to say that market prices are generally very accurate, but they would be even less so without short-sellers.)

See, if a stock is mostly owned by slow-moving "instutional" investors (banks, pension funds, etc), a negative piece of news (lackluster earnings report, business problems, ...) might take some time to be reflected in the stock price. For a stock that used to be up, retail (= normal people) investors would also be reluctant to sell without seeing that the stock is actually dropping. Short-sellers provide that impetus.

On the longer term, imagine a "growth" company. Its proponents affirm it will be the next Amazon/Apple/Tesla. Other people believe it be a scam. Without short-selling, the second group has no bearing on the stock price, which will only reflect the bull view. But with short-selling, this group now has a financial incentive to express its opinion in the market. This is particularly important because while the stock price should ideally be the endpoint of reflection about a company's value, the price (and its history) is in practice also a big data point in the investment decision. Would you rather purchase a company whose valuation has consistently been high compared to fundamentals, or one whose valuation has consistently been low? The former is typically (and with reason) interpreted has a sign of optimism regarding the company's prospects, and vice-versa for the latter.

That being said, short-selling is quite risky — since the market is skewed to the upside (thankfully!), and has been particularly so in recent years, given historically high company valuations, and rampant speculation in growth stocks (I'm not judging, I did my part).

GME's incredibly run is often attributed to a "short squeeze" (the wikipedia article is even titled GameStop short squeeze).

But that picture is incomplete. Retail interest, causing the price to go up, and the subsequent short squeeze were certainly the initial drivers of the stock's stratospheric rise. But it's not the only thing that sustained its growth to almost 500$.

There was at least one other major component to the price action, and that was a gamma squeeze (also known as gamma trap).

Gamma is a second-order stock option greek. If you don't know anything about stock options, I wrote a primer here. The primer covers first-order options greeks, including delta, but not the second-order gamma.

Delta in brief: if the delta is 0.5, that means if the stock price increases by 1$, the call option price will increase by 0.5$.

What's a gamma squeeze, then?

Most options are sold by market makers, which are large institutions such as investment banks, and they hedge the options they sell by purchasing (or selling) stock in order to be "delta neutral".

So for instance, if they sell a call option at the money ("ATM", strike price = current price), the delta is 0.5, and they will also purchase 50 shares of the underlying to hedge the option. Now if the price increases by 1$, they are up 50$ on the stock, down 50$ on the call, and they can profit by pocketing the premium.

Because delta changes as the price changes, the market maker needs to manage its stock position to keep its hedge. As an option gets in the money (strike price < current stock price), its delta increases, meaning the market maker must increase the number of stock it purchases to continue being delta-neutral on the call option it sold.

In the GME case, what what happened is that redditors purchased a lot of cheap out of the money call options (these have a low delta), and as the stock price rose and rose, these ended up far in the money, meaning the market makers had to ultimately purchase many shares for each of these calls, driving the stock price higher, and pushing all calls farther in the money.

As an aside, why did they purchase out of the money calls? Because they were cheap, and a rising share price would increase their price too. Slowly at first (delta is low), but increasingly so as the price increases. If you believe the price will increase a lot (which people on WallStreetBets obviously did), this is the best kind of option to be holding (if you believe the price will increase only moderately, you should hold ATM options instead).

Let's circle back — why is this called a gamma squeeze? Because it's caused by the delta increase in the ATM options, which causes market makers to increase their purchases to preserve their delta hedge. The rate at which delta increases as the price rises is given by gamma, the derivative of gamma with regard to price. (Note that gamma is not itself a constant but a function!)

How much of the squeeze vas due to shorts being squeezed vs gamma?

It's hard to say, and I don't know. Obviously the whole thing was started as a short squeeze, and then gamma amplified the movement.

There was also a ton of capital that piled on once the GME price anomaly caught everyone's attention. More on this in a bit.

Why is it so hard to say? Let's take the short part of the equation. Large enough funds have to report positions (including shorts) to the SEC, but such fillings are only made quarterly. The short ratio for a stock (the percentage of outstanding shares that have been sold short) is published by the exchange at the end of each month. The end result is that on any given day, we don't really know the short situation in a volatile environment.

Even if we had daily numbers, we still would be ignorant of the short turnover. For instance, a constant short ratio might mean that new short sales were made as prevous short positions were covered.

On the gamma side of things, we have more information, but only slightly. For each contract, we know the "open interest", which is the number of open contracts at the end of the previous day. We also know the number of transactions involving the contract made so far during the current day. So we could in theory scrape that data, assume that the counterparty for every call purchased was a market maker (an approximation which I believe to be close enough to the truth) and come up with a guesstimate of how much buying resulted from hedging the positions. There is a lot of imprecision and unknowns there, and buy volume does not give you, by itself, price impact.

The widely reported narrative was that GME was mostly traded by retail traders (normal people, not institutions). This was certainly true at first. Retail involvement caused the stock to rise, which in turns caused the short and gamma squeezes.

However, once the event made headlines, a lot of people poured in — both retail and institutional. But institutions (hedge funds, quant shops, etc) have a lot more money.

The fact that retail traders didn't drive all the momentum is easy to see when you realize that after many brokers, including Robinhood, temporary banned or severely limited trading on the stock, there was still high volumes of trading occuring. Interestingly, it seems like retail traders, on aggregate, sold as much as they bought on the week of 25 Jan.

I won't say more about this, because Matt Levine did so better than I could in his Money Stuff column, including supporting evidence for the points I make above.

In conclusion, gamble invest responsibly, and don't believe everything you're told. Do your own research!